Hay fever or allergic rhinitis is a common allergy. It is usually associated with the pollen season. The immune cells lining the nose, sinuses, eyelids and airways are very sensitive to airborne allergens, such as pollen from ragweed.

Examples of symptoms of hay fever are a runny nose, sneezing, watery eyes ad an itchy throat. These symptoms usually occur every year about the same time and last at least as king as the pollen is produced.

Hay fever is a misnomer because it is not due to hay but to pollen. It is therefore more accurate to speak of pollinosis or seasonal rhinitis (symptoms occur only during the pollen season).

Pollen is the male seed. It is made up of tiny grains with very different shapes, depending on the plant species. Some have prickles, others holes or slits. The average size is about 1/20 (0.05) mm across, which means they are invisible to the naked eye.

Pollen grains contain a large number of allergenic proteins. Some of the finer pollens are scattered by the wind (anemophilous pollens), while larger ones are transported by insects (entomophilous pollens).

Anemophilous pollens are the more allergenic and, because they are carried on the wind, they can travel over very long distances. This is why some people suffer from allergic reactions to the pollen of plants which do not grow in the immediate neighbourhood.

Allergy sufferers get an attack of pollinosis when the concentration of pollen in the air reaches or surpasses a certain threshold (variable according to species; average 10-20 grains of pollen per cubic metre of air).

Tip: Cut down on your attacks!
Different types of plants give off their pollen at different times of the year. You should check when these seasons are in your part of the world and avoid being out-of-doors as much as possible when the pollen count is high.

Remember: the peak pollen season may be delayed by a month or more in mountainous regions.

Mowing the lawn is by far the most harmful exercise for anyone allergic to graminaceous pollens and the mould that grows on grass.

Tree pollens are relatively heavy and so do not travel very far. This makes them easier to avoid.

Beware of honey! It may contain pollen, which could set off an allergic attack.

The symptoms of pollinosis:
Both seasonal rhinitis (hay fever) and non-seasonal rhinitis (perennial) produce essentially the same symptoms, but with different severities. These include: pruritus (itching) of the eyes, nose, and back of the throat; blocked or runny nose; sneezing; coughing. These basic symptoms may be complicated by anosmia (loss of sense of smell), inflammatory sinusitis, and asthma (especially during a wet summer).

At what age?
Hay fever may occur at any age, but it normally appears between 8-20 years old (rarely after 40 years old).

Before you go out for a ride or walk, or go on holiday, check the pollen calendar as well as pollen count forecasts
– listen to the radio, watch television, or read the newspapers.

Tip: Some basic precautions
Of course, it is impossible to avoid all contact with pollen. However, it is possible to limit the harm: 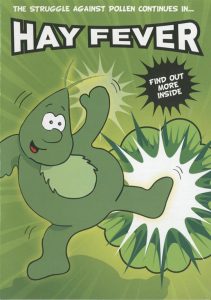 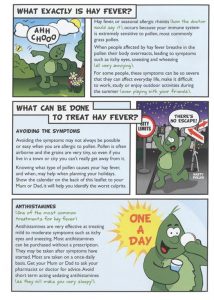 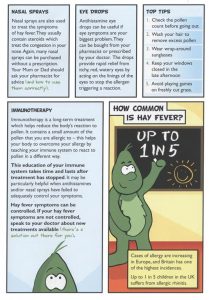 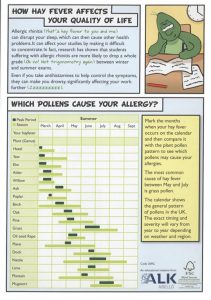 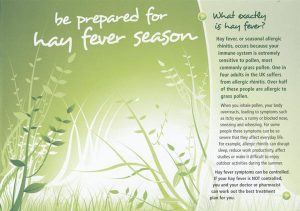 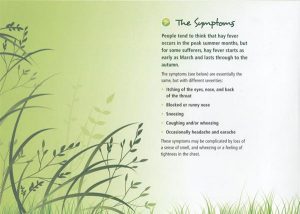 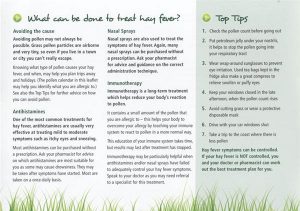 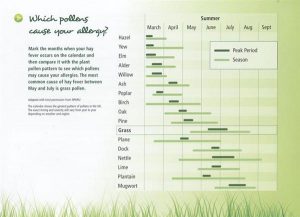 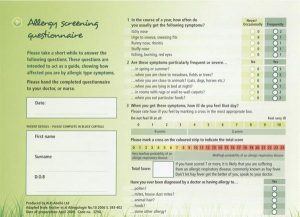 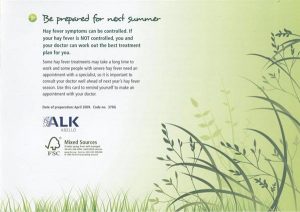